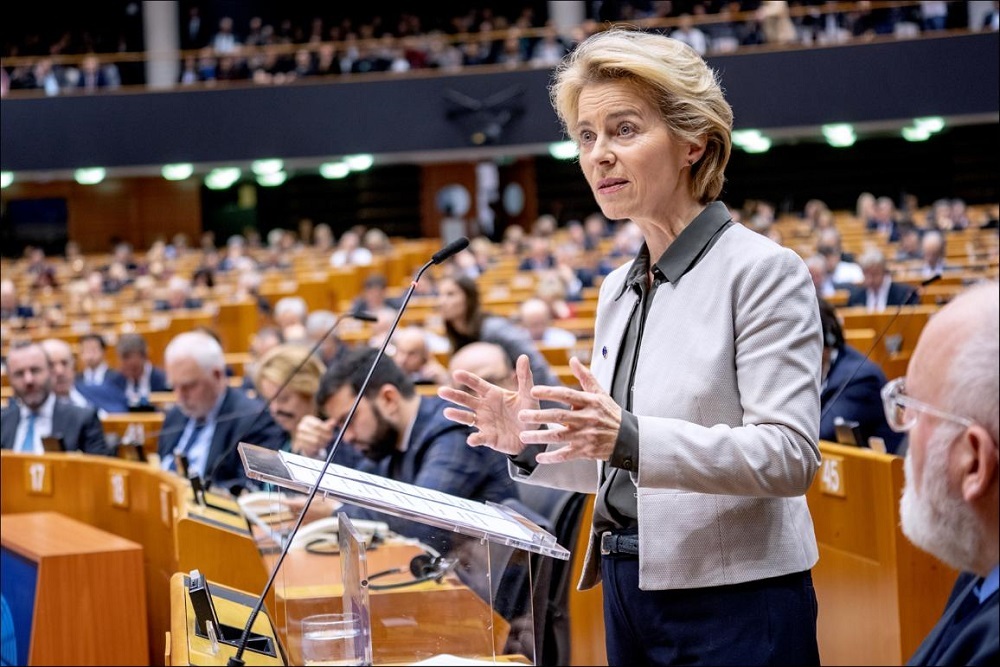 MEPs convened in a plenary session to discuss with Ursula von der Leyen and Frans Timmermans the roadmap to a climate-neutral continent.

Following Parliament’s recent declaration of a climate emergency, Commission President von der Leyen unveiled the Commission’s plans to achieve climate neutrality in the EU by 2050, on Wednesday in the Brussels Chamber.

Leaders of Parliament’s political groups outlined their views on how to ensure that the future “European Climate law” is funded and implemented in an economically and socially balanced way.

Concluding the two-hour debate, the Commissioner in charge of the Green Deal, Executive Vice-President Frans Timmermans, answered some of the MEPs’ most urgent questions on ways to finance the energy transition in central and eastern member states, and how to ensure that European and non-EU countries’ industries can compete under similar rules.

Click on the hyperlinks to watch the videos of interventions.

Esther De Lange (EPP, NL) said that her group shared the “moral obligation” to protect the planet: “We are the last generation to be able to do so. A coherent and consistent industrial policy and an ambitious green deal must go hand in hand, bringing the best and brightest together to deliver smart solutions.” If other parts of the world do not play along these lines too, the EU should reconsider open access to the European market, she concluded.

Iratxe García (S&D, ES) said: “A new growth model was presented today to transform the EU into a fairer and more prosperous society”. This model should be based on three pillars: a green pillar to achieve climate targets, a red pillar to ensure a strong social dimension to the Green Deal and a financial one, whereby the long-term EU budget should provide sufficient resources to achieve these objectives.

“We will succeed only if we change this challenge into an opportunity”, said Dacian Cioloș (RE, RO). In order to do so, “the Green Deal should not bring new red tape”, but lead to society mobilising. He called for the EU's ambition for greenhouse gas emissions reductions to be raised in the upcoming climate law, and for a twofold approach to green digitalisation and technologies.

Philippe Lamberts (Greens/EFA, BE) requested that the EU commit to a 65 % reduction of greenhouse gas emissions by 2030 and to ensure sustainable resources, biodiversity and tackle pollution. The “Just Transition Fund” should benefit the most vulnerable people, while farming and financial policy need a complete overhaul, he said.

Silvia Sardone (ID, IT) asked the Commission: “Have you looked at the social and economic impact of achieving climate neutrality by 2050?” She said there is a “contradiction” between EU climate goals and trade deals signed with countries with lower environmental standards.

Ryszard Legutko (ECR, PL) said that the Commission should work with member states, which are about to discuss emission reduction targets in the European Council. “Is the Commission trying to seize power from the member states? (...) Governments should not be sidelined on something so fundamental”, he added.

Manon Aubry (GUE/NGL, FR) proposed an alternative “new green deal” by her group including carbon, plastic and kerosene taxes and binding measures for a 70 % emissions reduction to achieve a more human “social and ecological” transition.

Watch the videos of the first round of political group speakers.

Parliament will give its answer to the Commission’s plans by adopting a resolution during the 13-16 January 2020 plenary session.