EUROPEAN PARLIAMENT: Looking ahead: what MEPs will be working on until the end of 2018 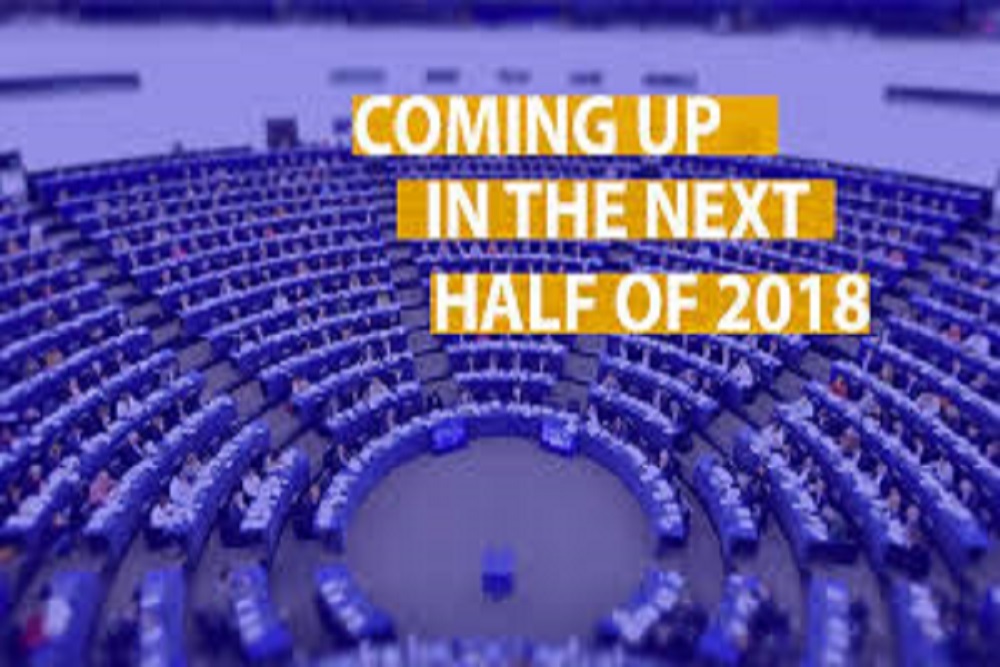 In the coming months, MEPs will continue to debate the future of Europe and vote on new rules for energy, telecommunications and transport.

State of the EU
A debate on the state of the European Union will take place in September. European Commission President Jean Claude Juncker will present the Commission’s plans for the last year of its term to MEPs.
Future of Europe
As part of debates on the future of Europe initiated by the Parliament this year, heads of state or government have been able to lay out their vision for the EU.
Six more will be speaking in plenary before the end of the year: Greek Prime Minister Alexis Tsipras, Estonian Prime Minister Jüri Ratas, Romanian President Klaus Iohannis, German chancellor Angela Merkel, Danish Prime Minister Lars Løkke Rasmussen and Spanish Prime Minister Pedro Sánchez.
Energy
In November, MEPs will vote on two deals reached with EU governments on legislation aiming to boost green energy and efficient consumption. In June, Parliament and Council negotiators agreed on a new 32.5% energy efficiency target for 2030. They also agreed that by 2030 at least 32% of energy consumption should come from renewables.
Digital single market
In October, MEPs will vote on rules paving the way for 5G networks by 2020 and capping the prices of calls made to other EU countries, following an informal deal made with EU countries in the Council.
Another informal agreement on audiovisual media services will also need plenary approval. This proposal  sets out rules for video-on demand services and video-sharing platforms to ensure a level playing field between them and traditional broadcasters. The vote is scheduled for the beginning of October.
Transport
The transport committee will return to the issue of truck drivers’ resting and working conditions, after MEPs rejected its proposed amendments during July's plenary session in Strasbourg. In addition  MEPs will vote on a report outlining the future of mobility in the EU in September.
Copyright
Updating copyright rules for the digital age will remain on Parliament’s agenda. In July, MEPs rejected a proposal by the legal affairs committee to start negotiations with the Council. As a result, MEPs will discuss and vote on the issue during September's plenary session in Strasbourg.
Antibiotics
An agreement with Council aiming to cut the use of antibiotics in farms will be put to a plenary vote at the end of October. The EU is concerned about the spread of drug-resistant bacteria posing an increasing risk to human health.
Solidarity corps
A European Solidarity Corps will offer volunteers the chance to work around the EU to protect the environment and integrate migrants. An informal agreement with Council on the initiative is due to be confirmed by MEPs during September's plenary session in Strasbourg.
Hungary
During September's plenary session in Strasbourg, MEPs will vote on a proposal to call on the Council to prevent a potential breach of EU values in Hungary. Parliament’s civil liberties committee has expressed serious concerns on a number of issues, including the independence of the judiciary. If MEPs agree to go through with this proposal, it would be the first time Parliament triggers a procedure that might ultimately lead to sanctions being imposed on the country.
Prizes
Parliament will award the Sakharov Prize for Freedom of Thought in December. The prize honours people and organisations from across the world fighting for human rights and democracy.
In November, MEPs will choose the winner of the 2018 Lux film prize. The prize aims to promote European cinema and to encourage debates about social issues and EU values.
Other issues
MEPs vote on own-initiative reports concerning EU-US relations and EU-China relations in September.
In December the special committee investigating measures to fight terrorism will publish its report.That same month there will also be a report on corporate taxation and on an inquiry into money laundering and tax evasion.